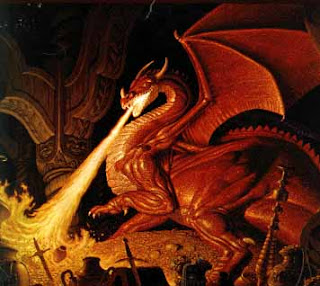 Well, it has been almost one week since I have last posted anything.  For you, my loyal readers (note: I may at some point in the not-too-far future refer to you as "my loyal minions."  Feel free to be honored by that title.  If I were you, I would be honored), I want to let you know that I HAVE RETURNED VICTORIOUS!  Allow me to share my story:

My story begins several years ago, when I, the humble, handsome, hard-working (notice how most of the adjectives start with "h"?  I did), and lowly peasant Grog, was given taken captive by the Lord and Lady of the region.


Before my captivity, I had worked on my farm, continually laboring to feed my family.  Unfortunately, my farm was located on a land which bordered the treacherous mountains.  In the mountains, there resided many dangerous animals, like orcs, orgres, dragons, and the ever-present liger (part tiger, part lion, totally awesome!).  Luckily, we had never been full-on attacked by any of them before, but I always attributed that to the fact that we could outsmart them by telling them that we were deformed orcs or ligers (we were too small to be ogres and couldn't breathe fire like dragons) and because we weren't the same, we decided to farm instead of kill.

Those excuses usually worked.  Except this last time.

They came to our farm, and when we told them that we were deformed orcs, they did something they hadn't done before: They didn't believe us.  When we saw that they didn't believe us anymore, the first thing that I thought was, "Crap. We're doomed now."

After that thought, I knew that I needed to buy some time to get out of there before I would find myself no longer among the living.  So, I told them that I could show them that I was a deformed orc, but I would first need to go back to the house to get the stuff.  Luckily, they did not follow me, but rather stayed at the edge of my farm and consulted with themselves.

As soon as I was out of sight, I took my family and sprinted to the Lord and Lady's manor for protection.  They agreed on the condition that I do whatever they require, and that I learn how to be a dragon slayer.  For those of you who know me, I do not want to slay dragons.  First of all, they're not fun to slay, secondly, they're really big, and thirdly, they breathe fire and try to kill those who come close to them.  The only benefit is that if you manage to kill a dragon, you get to keep the treasure that they protect.

Anyway, my choice was to either go back home and get eaten by the orcs, ogres, dragons, and ligers, or to subject myself to the Lord and Lady's requirements.  Well, it didn't take me too long to decide that I would rather go and deal with the monsters rather than deal with the requirements put forth by the nobility.  However, my wife and kids convinced me that it would be better that we be safe and unhappy than be dead and happy.  Although I disagreed, I acquiesced to them.

I accepted the Lord and Lady's requirements so my family would be safe.

So, off I went to dragon slayer training.

It had been a long time since I was sent off to training, and after much work, many cuts and burns, and long durations of insomnia, the first test was ready come upon me.  That was the reason why I was unable to post recently.  I had my first major dragon slayer test.

I was put up against three small dragons (a small dragon is about the same size as a VW bus, and they still breathe fire).  Although they were not easy, I passed the test.  I was able to slay all three of the dragons (because of the burns, cuts, and others injuries I sustained from the battles, it took longer to get back online).

Before you think that I am ready to go out and slay dragons, I am not.  I still have to prepare myself for the bigger and badder ones which I will face in the future.  I will have fierce tests like this at least once yearly, where I will be put up against larger and larger dragons, until I get to the point where I will be able to stand against any dragon (at least that's what I'm told, but if that were true, why would they be training so many dragon slayers? Would there be any room or use for them all, unless they were being killed at an astounding rate?).

So, please send me all of your luck.  Also, please send me either better armor, or gold pieces so I may afford better armor--the armor I am given is broken, and that's why I get injured so often.  You know what they say: Better armor protects you from dragons when you're fighting them!
Dictated by Me, and Transcribed by Me at 10:22 AM