While I was having fun over the Christmas weekend, I was invited to go on a "man"date.

What is a "man"date?  Simply, it is a date for men.  Not a romantic date, with romance, but rather a guys out date--more of a bromance.  It was just to strengthen our bro-bonds.

If this post is too "manly" for you, you can click on another post and wash this testosterone-filled brost (bro-post shortened) out of your hair.  I won't hold it against you, but we may hold your man card until you're ready to become a man again.


That last line was told to me just after I agreed to the "man"date.  But, since I went, I got it back.  I am again a man. 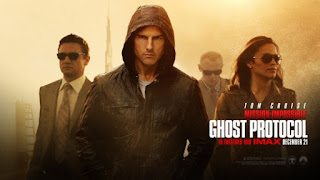 Anyway, for the "man"date, we went to see Mission Impossible: Ghost Protocol.  That was the most manly film there was playing.

As for the film, I'm not a big fan of the Mission Impossible films because they all revolve around the same things: Tom Cruise gets the mission, the mission goes horribly awry, Tom Cruise almost gets killed several times but miraculously survives while all the bad guys die, Tom Cruise saves the day at the last minute, there are TONS of special effects.

The special effects are cool, but the plot is so flimsy that it makes toilet paper look like steel.

The only place in the movie which scared me was the entire section in the Dubai Tower.  Now, I'm horribly afraid of heights, and several of the sequences in that section were outside the tower, which was about 140 stories up.  That did not sit well for me.

I wasn't scared for any part of the movie, but rather I was scared because of the downward shots which just made me feel kind of like I was that high up.  (I have a tendency to picture myself in the situations in the movies, and because that was so high, it made me really scared when I pictured myself in that position)

Not to give anything away about the ending, but I will say this: Tom Cruise does not die.  He will go on to the next Mission Impossible movie, Mission Impossible: Geriatric Unit, and possibly the final one, Mission Possible, where he finally gets one as easy as helping someone across the street.

I say that because Tom Cruise sure is getting old.  In the movie, he didn't look as good as he did in the other Mission Impossible movies.  He started looking a bit not-as-fit (that was the nicest way I could put that he looked a bit flabby).  I think he needs to get out of there before he starts looking like Rambo or Terminator, where their only saving grace in the last movies was the fact that the enemies were completely blind as soon as they held up a gun to shoot.

Anyway, I have gone WAY off from where I started.  I guess now would be a good time to bail on this post.