Looking for a Difference, eh? 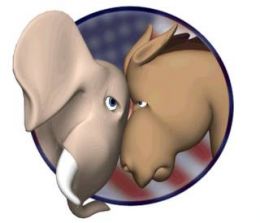 The prevailing talk on most of the news channels (television, radio, print media, and almost everywhere you look online) is politics.  It's everywhere!  And the big news is the Mitt Romney/Rick Santorum squabble over Michigan.

Gratefully, that primary is done, and with that, so should be the Republican nomination race.  Honestly, the only contender that Mitt Romney faces is Rick Santorum, but since he hasn't fared very well lately, I doubt that he will be able to pull off any sort of upset.

Anyway,  I'm getting off track here.  I need to put myself back on track.

What I really wanted to talk about today was the problems with is the complaints against Mitt Romney.


I don't understand the reason why Republicans are caring about the "complaints".  Aren't those "complaints" just the application of the core beliefs which Republicans promulgate?  Are Republicans saying that they don't truly believe in their core values when they're put in practice?

I want to state the core beliefs of both Republicans and Democrats so you can understand what I'm saying, so then we can discuss why they're complaining.

Republicans: Republicans believe that hard work and the free market triumph all.  Government in and of itself does not encourage hard work and true success.  It inhibits growth and innovation through laws, regulations, and petty meddlings in the free market place.  Granted, government does have a place in protecting its citizens from violence within and without its borders, but that is it.  It may place some laws so that society in general may function properly, however, it should not regulate the affairs of business nor stand in the way of the economy.  The free market will provide for those without (anybody heard of philanthropy?), and will rightly reward those who innovate and work hard.

Republicans only care for their own.  They do not care about those who want to be given things on a silver plate.  Only those who work hard and innovate should be rewarded.  If you want to succeed, get a job and work your way to success.  Don't rely on others to do things for you.

Their philosophy is one which states: Teach a man to fish, they will have the tools to succeed; if they don't catch fish, well, sucks to be them, because they will die, and that is pruning the dead leaves from the tree.

It is an interesting philosophy, which places a huge emphasis on the "Me" and none on the "helping others," unless it is to help you succeed.

Democrats: Democrats believe that those who have should take care of those who have not.  There are innumerable reasons for why people may not be able to work or succeed - bad luck, injury, illness, laziness, or whatever other reason people may give.  They are human, and we, out of compassion, need to take care of them and nurture them back into the workforce.  We need to provide a strong safety net so that nobody has to suffer.  By we, they mean the government, because that is the only way to provide uniform coverage for all those across the nation who need our help!

Democrats care about the poor.  They see suffering and pain and hardships, and their hearts weep.  Democrats don't care about the economy in general, nor those who succeed.  They only see the poor and want to help them.  They say that because the poor cannot get out of their situation, the government must step in, like a parent, and carry their children, the poor, to greener pastures, and we'll figure out the details later.

Now, we can go back to the original complaint: Why are Republicans complaining against Mitt Romney?

I have yet to hear a coherent reason as to why.  My only guess is that Mitt Romney is concentrated Republicanism.  He's too much of a Republican for Republicans to handle.

I mean, take all of the Republican concepts and put them in a blender.  Blend until smooth and pour into a glass.  Add one great hairdo, and you've got your perfect Republican candidate: Mitt Romney.

I guess he's too strong of a candidate for all of those vocal "Republicans" to handle.  Maybe they should put a warning on Mitt Romney, stating:

Warning! Take in small amounts!  Too much at once can cause delusions, hypocrisy, and desertion.
Dictated by Me, and Transcribed by Me at 11:39 AM