All Day in the Waiting Area

Let me tell you about my day today: 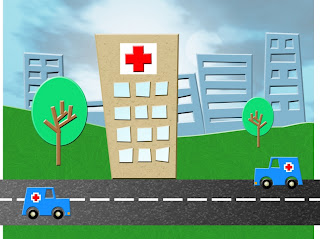 With that said, let the story continue.

We needed to be at the hospital at 6a in order to check two of our kids into the Same Day Surgery unit.
That's right.  We had two kids who went into Same Day Surgery this morning.  I'll go into more detail as you read on.

So, we were already late this morning, and we had decided that since five of the seven of us had doctor appointments today (two for surgery and three for doctor appointments next door to the hospital), we would take my wife with us and leave our one year old with my mother-in-law.  We drove to our mother-in-law's place and arrived there a little behind schedule (we wanted to be there at around 4.30, but we got there about 5.15a).

We then booked it over to the hospital.  Thanks to the early hour and the fact that nobody else was on the road at 5a, we were able to cut almost 20 minutes off of our travel time to the hospital.  We actually arrived at 5.50a.

So, our two kids were checked into the Same Day Surgery unit on time!

So, as to not worry you about what happened, they went in for an eye exam and angiogram to see if they have FEVR (familial exudative vitreoretinopathy).  They were put under general anesthesia so the doctor could examine their eyes (they are 6 and 3, so that was the best way to get a thorough eye exam on their eyes).

My wife, two other daughters (7 and 4), and myself waited in the post-op waiting room for the two who went through the eye exam to wake up.  Man, that took forever.  They finally woke up around 10a, and then we finally left at 11a to get out of the hospital and get some lunch.

So, we went to the zoo for an hour.  We got to see the elephants, giraffes, and tigers (our 3 year old decided which animals we were going to visit) before we had to get some lunch and get back for the eye appointments.

At 1p, my two other daughters and myself had eye appointments to see if we had FEVR (actually, our 7 year old has FEVR, so her exam was to see if it has stabilized).  It did not appear that my 4 year old has it, but they told us to schedule an exam under anesthesia for her to make sure (they thought the same thing about our 3 year old, and then after today's exam, they found that she has FEVR - although it's a mild case).

I was informed that my eyes looked normal, but since they know very little about FEVR, they wanted to do an angiogram of my eyes to see if they could find our more about FEVR (my wife was told the same).  We were also asked by the doctor if we would be willing to undergo more tests to help them find out more about it (to which we agreed because my wife is a scientist, and I'm very altruistic, so I want to help).

We finally got home around 5p, so we have been at the hospital for about 10 hours.  I do not want to go through another day like this (mainly because my eyes are dilated , and it's annoying to drive and use your eyes at all when they're dilated).

Well, that is my day so far, and I have a lot more to accomplish, unfortunately, I'm having a difficult time staying awake, so we'll see how far this goes.
Dictated by Me, and Transcribed by Me at 9:06 PM