Spudtopia - The Land of Deliciousness! 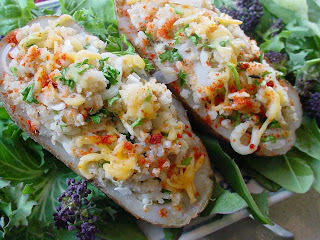 Ah, my restaurant.  This was to be one of my greatest achievements, but alas, it costs a lot to open and run a restaurant.  Even one as simple as this.

Anyway, when I served a mission in Spain, I got to eat a lot of good, authentic, Spanish food.  I had several occasions where I got to eat paella (with rabbit and seafood--both delicious!), seafood (loads of shellfish--also delicious!), and many other authentic foods.

While there, I had the opportunity to visit a little shop in Malaga, where I had my first taste of papas.  They were delicious and very simple: they consisted of a one pound potato, stuffed full of a dressing and other things.  My first time was a marisco (seafood) one, which consisted of a Thousand Island-like dressing, corn, baby shrimp, and a few other things (I can't remember all of it, because it was so long ago).


It was heaven.  I ate there several more times because it was cheap (about $5) and filled me completely (those of you who have ever fed me know that I eat about 2 - 3 times the average person).

When I returned to the US, I couldn't find a restaurant that offered the same thing.  The closest thing was Wendy's, but they only had traditional potatoes, with sour cream and chives.  I wanted something better, but they didn't offer it.

Spudtopia revolves around stuffed potatoes.  There would be two sizes, one pound and 1/4 pound (for kids).  They would be filled with dressings, and other toppings.  The way they would be made is:


When I did a trial run of this at fairs and festivals, we offered four types (know that since it was about 5 years ago, I have forgotten some of the ingredients, but that's alright because you can do some delicious trial and error for yourself): 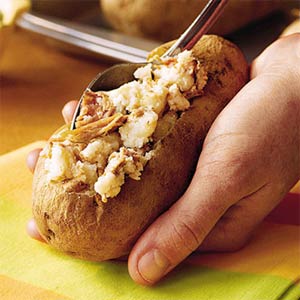 That was the base of the restaurant.  In addition, I wanted to include smoothies, so the whole restaurant would be geared more toward healthy eating.  Although the portions would be large, they would not be heavy on the fat or grease.  Along with the smoothies, they would be more healthy than most other options on the market.

I did not have a list of smoothie drinks, but since I had worked at both Zuka Juice (bought out by Jamba Juice) and Jamba Juice, I remembered many of the drinks and how they were made (actually, if you watch them make the stuff, you can easily figure out the exact portions of ingredients for their drinks).

The initial startup fees would be pretty low, considering that if you just wanted to start with the potatoes, you would need an oven, a cooking station for the meat, a fridge for the ingredients that you would add to the potato, and utensils.  When you add the smoothies, it costs a lot more, because you would add mixers, drink stations, freezers, and the tools needed to run those.

Although it will cost quite a bit to start, with the right mix of marketing, it will grow very quickly in lower income and Latin-American areas (it's also a popular food among the lower income classes in Mexico and other Latin-American countries).  It will be a pretty profitable venture, in my opinion.
Dictated by Me, and Transcribed by Me at 9:39 PM