Not Enough Time in One Day! 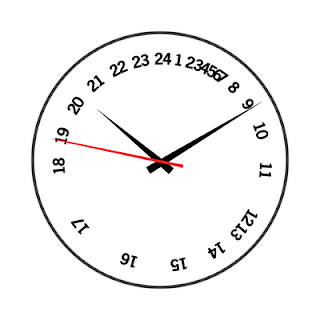 I am almost positive that almost everyone has heard someone say a slight variation of the following complaint: Man, I wish there were more hours in a day.

As a slight tangent, I apologize for my ghetto voice coming out earlier in the post.  I usually keep it under strict lock and key, however, due to how late it is tonight, it has managed to open the lock and stick its head out.  But don't worry; I have managed to purchase another lock (this time, it will work!), and my ghetto voice should not rear its ugly head again.


Anyway, I guess I could consider this as two posts acting as one.  I have a novelty business idea which I came up with several years ago revolving around making clocks that ran as 18 hour clocks.  Then there is lately, where I have been running out of time before I could even make a post on this blog, so I would like to have more time in the day so I could accomplish all that I want done.

Since I'm not really in the mood to write about the business (but I will do that soon, because it's a fun business idea, and I think I may just do it for fun), you'll get my thoughts about not having enough time in the day.

That then begs the question: Why do we have too many things to do?

(Many of these questions and thoughts are coming to me as I type this, so please forgive the sudden changing of topic or sudden rambling, because they're pretty much my thoughts as they occur)

I don't know if we have to many things to accomplish.  I mean, as soon as I typed that question, I tried to think of what things I need to accomplish, and I couldn't think of a single thing.  Now, that may be because it's really late, but I wonder if it really is because of that.  Part of me wonders if it is because it's not that I have a lot of things I need to accomplish, but rather it is because there are too many things I want to do--there are too many fun things around that I want to experience, and I think I would feel deprived if I missed them.

Actually, the more I think about that, the more correct I think it is.  Think about it: what are the things we need to do in life:

I would not think that spending 13 hours a day working to save up to go to DisneyWorld/Sea World/6 Flags/whatever else would classify as what would be most important in life.  That is not to say that it would not be worth it.  It would DEFINITELY be worth it, however, if we decide that it is at the same stage as our other needs, I think we're misrepresenting something.

I guess this is going to require a more thorough discussion about needs and wants, and what the differences are between them.  So, I'm not going to go any further into that, because it'll take away from that post.  Anyway, suffice it to say that we have enough time to do what we need to do, but not enough time to do everything we want to do.

So, with that being said, I think we need to make sure that we have our priorities set forth correctly so we can make the best use of whatever time we have allotted here.
Dictated by Me, and Transcribed by Me at 11:15 PM