Just Me and My ADD 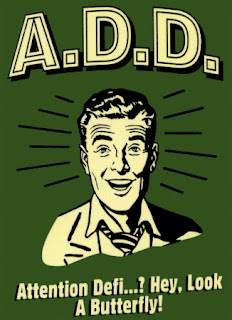 There are plenty of times when I want to write something, but my mind is moving at a thousand miles per hour, and my fingers move at about 10 miles per hour.  I start writing things down, but by the time I get through my first sentence, my mind has already skipped down the road, and is so far away from what I started thinking about, that I completely forgot what I was first thinking about.

I don't know if that made much sense to you, but it sure did for me... at least I hope it made sense to me.  With that last statement, you are probably asking yourself whether or not I am sane.  Well, I would like to think I am, but it's still under debate.

So, why do I write like this so early in the morning?  Simple: it's because I have been wondering if I have ADD (or ADHD, but since they're pretty similar, symptom-wise, I'll just say ADD).


Why would I think something so absurd as that?  I've been wondering about this for several years (actually, I started wondering about it back when I was in high school, but I didn't really care back then because it was more of a benefit rather than a liability, which is what it has become out here in the real world).  I have checked into the symptoms of ADD, and I have found (through self-diagnosis) that I match most of the symptoms for it.

Now, I do not want to come across like a hypochondriac, because I don't think I have every illness (although I do wonder at times what it would be like to experience many of the illnesses/sicknesses there are, just so I can have empathy for those who do have them).  I do think I have something, though, because no matter how hard I try to overcome certain aspects of my life (even with help from family, religion, and therapists), I am unable to.  It's not that I don't try to overcome them, it's that I can't.  No matter how hard I try, I can't.

The difficulty of putting into words my thoughts and feelings is frustrating.  When I read (and re-read) the above paragraph, I wish I could convey my feelings better, but I cannot.  It reminds me of when I worked at the State Mental Hospital here in Utah.  No matter how much the patients tried to explain what they were feeling, they were unable to completely put to words what they were thinking and feeling.  It is very frustrating on my end, and it leads to a lot of distrust (you won't believe that I'm experiencing this because I can't explain what I'm feeling) and admonishing ("Tuck in your skirt and just do it!"  "Real men don't complain about things like this!" and "Are you really sure that you have a medical problem? Are you sure it just isn't something simple like, you need to be better organized?")

I went and found a list of questions which help people who think they may have adult ADD see if they really may have it.  If you are able to answer "yes" to the majority of the following questions (and they add that the behaviors are severe enough that they interfere with your daily activities, you may have ADD):

My answers to the following would be:
According to the list of questions, I think I would have ADD (given that 16 of 18 were yes), and they do severely impede my daily functioning (although I have learned to deal with some of the things, and it takes me a lot longer to accomplish many things, it is something that makes it extremely difficult to completely function in today's world).  But since I am not a professional (and even professionals don't self-diagnose--they go to another professional), I think I need to see one to find out if I really have it.

I know that most people want to blame their weaknesses and shortcomings on some medical reason, and there have been many times I have thought that would be easier in life, but in reality, I don't want to blame it on a medical issue.  Not because it makes me seem defective, imperfect, or anything like that.  It's nothing like that.

I don't want it to be a medical reason because I don't want people thinking I'm taking the easy way out and looking down on me for "not taking full responsibility for my actions".  I don't want that.  I'm not the kind of person who does that.

I don't want to give people any reason to question my integrity.

I just want to understand what my problem is, and how to overcome it (be it through therapy, medication, or whatever else).
Dictated by Me, and Transcribed by Me at 6:50 AM