Wanna Buy Something From a Fish? 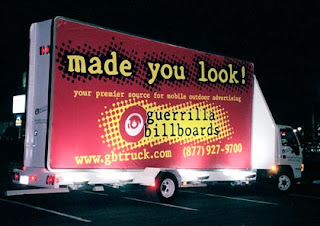 Back when I first started my advertising company, Brainiacs Lounge, one of the things I did do distinguish my company from all of the other advertising companies was to think of different advertising vehicles (not the actual vehicles, like the ones you drive, but rather venues or methods to do advertising.  Most companies focus on about five different kinds, but I wanted to have a much larger selection so small businesses could more effectively advertise their company).

I had thought of about two dozen methods, but I still wanted more.  You know, the more you have, the better you can serve your clientele.


I was thinking one day, and I remembered, while driving through Las Vegas, seeing mobile billboards.  Mobile billboards are basically flatbed trucks with a billboard fastened to the flatbed.  They will drive through the busy streets for hours at a time.  It's a method of bringing the freeway billboards to the people.

It's pretty effective.  Companies pay a lot of money to advertise on those, and many people in Las Vegas look at them (almost all of those who look at them are tourists because they have never seen something like that).

I wanted to take that a step further.  I thought that if there are many mobile billboards out on the street, it will be like box trucks - you don't really notice them anymore.  But, what would get noticed, no matter how many there were?

That was my question.  And finally, after much thought, I figured it out:  Turn the cars into animals with billboards built into them.

What this would be is you would take a vehicle (flatbed truck would be the best), change the exterior so it resembles a fish.  The closest picture I could find (my drawing does not do it ANY favors and isn't very clear) is the Goldfish-mobile: 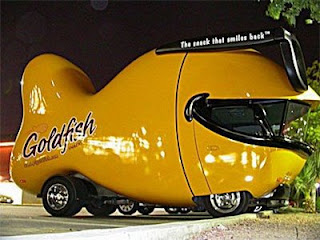 This is a good representation of how my mobile billboards would work.  They would look like an animal, but at the back, where the tail tin meets the main body, there would be a billboard on each side.

The billboard would have the advertisement.  It would all come together so it wouldn't look completely out of place.

This would be amazing, because the vehicle would attract people's attention, because it looks like it should be in a parade (and who doesn't look when there's a parade or when you see a float traveling to or from a parade?).  Because it will attract many more eyes, you could charge more than what the mobile billboard companies are currently charging.

I tell you, this would be fun and very profitable.  Oh, and I came up with many other vehicle designs which could be used (most of them were animals, such as monkeys, birds, fish, but there were also objects or sceneries).  If you are interested in doing this, let me know and I'll help you out as much as I can.
Dictated by Me, and Transcribed by Me at 6:10 AM