Thinkin' in the Shower Notepad 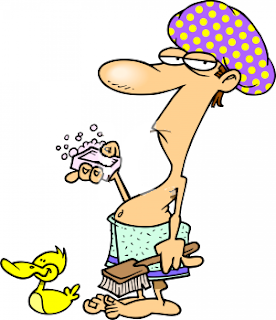 I first had this idea years ago, but I failed to do anything about it.  It would have been very simple to accomplish, but due to my neglect and focusing on other things, it has already been done by many other companies.

I came about this idea because I do most of my thinking while in the shower.  I would come up with many, many ideas and productive thoughts, but as soon as I got out of the shower and to a notepad, all of the ideas and thoughts were lost.  I would get so frustrated that I tried to figure out a way to solve the problem.

What I came up with was very simple: a charcoal pencil attached to a string which was attached to a pad of waterproof water.  The pad of paper would be affixed to the shower wall by either foam tape or suction cups (I wasn't sure on which one would be better--the suction cups will lose their suction within a relatively short time, and the foam tape never comes off).

That was it.  It was that simple.

I guess there's nothing really special about this product, but it was a brilliant idea when I first came up with it.  Too bad I didn't take advantage of it at that time. :(
Dictated by Me, and Transcribed by Me at 8:22 AM