Getting Creative with the Hub Caps 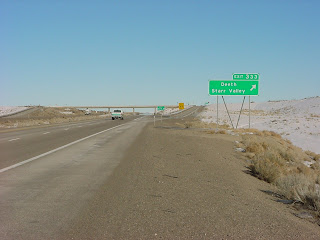 When I was younger, my family would drive from Denver to Salt Lake City and back during the summer for family reunions.  Our trips would almost always go via I-80.

For those of you who have never traveled through the stretch of I-80 which runs from Cheyenne to Evanston, don't.  Scratch that.  I would encourage the insomniacs and anyone else who would like to sleep to drive through that stretch of land.  No, wait.  That would make for all sorts of accidents.  Okay, have someone else drive who will NOT fall asleep, and you enjoy the scenery.

Or lack of it.


After moving here to Utah, I was informed of an interesting saying: There's a pretty girl behind every tree in Wyoming.  If you have driven I-80, you laugh at that, because there are no trees to be found.  None at all.

Now, I married a girl from Wyoming, and she's really pretty, so she must be from the northern part of Wyoming.  There are TONS of trees and beautiful scenery up there.  It is COMPLETELY different from around I-80.  So different that you would think that you're in a completely different state.  Maybe the people who made up that saying about pretty girls in Wyoming didn't think they were actually in Wyoming.

So, during these trips on I-80, I would stare out the window, and at the semi trucks' wheels.  They were HUGE!

Since I was young, they were right around the same height as me.  I would stare at how they looked at different speeds (lots of semi trucks travel I-80, and there is always a lot of construction, so travel speeds fluctuate all the time), and become entranced by the spinning motion (it's good that I don't have motion sickness, or else I would not have enjoyed those trips).

Since most of them could not use the tractor trailer as an ad (because they usually had one on them), nor could they use their cab (you would have to re-wrap or re-paint your cab every time you changed advertisers, and that would not be very efficient or profitable), there had to be a way to make it work.

That was when I remembered staring at the wheels during the long trips on I-80.  That would work.

There are two different advertisement methods I thought of using: A stationary ad, and A moving ad.

After locking the ad in position, the ad would be weighted at the bottom, so it would naturally stay somewhat stable.  It will also use air bearings to enable the ad to stay somewhat still.  Although the ad will sway a little from side to side, it will be easily readable for most travelers.

A Moving Ad
The moving ad is a completely different animal.  I wanted to do this because it would look cooler, and would be more of a challenge, but unfortunately, I'm not sure if it can truly be done.

The moving ad would be locked into the ad base without any air bearings.  It would spin as a normal hub cap does.  The ad, however, would look completely different from anything else.

The closest thing I can relate it to would be the toy fans which have lights on the blades.  When the blades spin, the lights shine, showing different styles and looks, and they look like the following video (okay, so it's not a fan, but it has the same concept):

Anyway, with this, you would be able to show multiple ads on the same hub cap.  At different speed ranges, different ads would show, thus making it look cooler, and people would see different ads at different times all while seeing the same truck.

I doubt that this sounds as cool as it looks in my head, but since I don't have a scanner (I have many of these drawn out), I cannot upload the drawings so you can get a better idea of what it is supposed to look like.

This idea would be a very good idea for truck drivers (and possibly to regular drivers, if I think mass production would be a good thing, but I haven't looked that much into it) because they would be more profitable.  Although it will be difficult for long-haul drivers to find adequate advertisers (they would have to be nation-wide companies, after all), if they work with a national marketing company, it would be possible for them.

I hope this idea gets done some time.  It would definitely make the long drives on I-80 a lot more palatable.
Dictated by Me, and Transcribed by Me at 7:44 AM