Driving in a New Direction 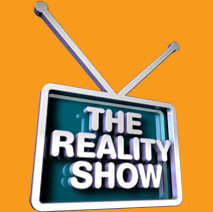 That's right.  I have wanted to be on a reality show ever since I was in high school.  It's probably because those who are shown on there seem to be stupid individuals who cannot do most things right, and I think I can do things better than them.  I guess that would be considered narcissism.


Anyway, I decided that I would no longer make excuses for why I cannot be on there, and I would at least apply.  I tell you what, there are some awesome opportunities out there.  There are the basic shows which most of us are aware of: Survivor, Amazing Race, Big Brother, Who Wants to be a Millionaire?, just to name a few. But there are hundreds of others which I had no clue about.

I applied to be one one which is like a real-life Reel Steel movie, where you get to control an 8 foot boxing robot.  That was one of the most fun ones I applied to so far.  I would love being on that one.  That one would be like a 3D game.  I think I would love those kinds of games.

That was just one of the few which I applied to last week.  I don't really remember the other ones (if there are any casting directors out there who are reading this and I applied to your show, don't be angry with me, or if you do get angry with me, get even by casting me on the show so I can be publicly humiliated!  I hear that's the best kind of revenge - the one in front of millions of people), but I with all the ones I signed up for, I thought they would be fun to do.

I think for the next little while, I'll post about the ones I applied to, why I applied to them, and stuff like that.  I know this will be different from the past posts I have written, but this is my blog, and if you don't want to read this, you can just skip over this.  I will also be writing about other things, such as politics, business, personal hygiene (okay, so I threw this in the mix just to liven it up, but I don't really think I'll be writing about this much if at all), and other things which I happen to just happen upon, so don't think I'll be going all Hollywood on you.

Anyway (hey!  This is the third time I have used "Anyway" in this post!  Either that's a new personal record, or it's an odd way for me to separate this post into sections), I can't really think of anything else to write, so I will disappear for at least the next 10 minutes, but I will be back soon.
Dictated by Me, and Transcribed by Me at 3:40 AM