Yesterday, I was looking over a hymn for my church which is called, Oh Say What is Truth?  The lyrics are posted below: 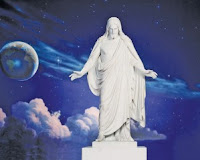 Oh say, what is truth? 'Tis the fairest gem
That the riches of worlds can produce,
And priceless the value of truth will be when
The proud monarch's costliest diadem
Is counted but dross and refuse.

Yes, say, what is truth? 'Tis the brightest prize
To which mortals or Gods can aspire;
Go search in the depths where it glittering lies
Or ascend in pursuit to the loftiest skies.
'Tis an aim for the noblest desire.

The sceptre may fall from the despot's grasp
When with winds of stern justice he copes,
But the pillar of truth will endure to the last,
And its firm-rooted bulwarks outstand the rude blast,
And the wreck of the fell tyrant's hopes.

Then say, what is truth? 'Tis the last and the first,
For the limits of time it steps o'er.
Though the heavens depart and the earth's fountains burst,
Truth, the sum of existence, will weather the worst,
Eternal, unchanged, evermore.

As I was thinking about it, I was struck by the thought that science and religion are the same.  Well, that is not to say that they're the same in every way, but they both seek the same thing: Truth.  The only difference is how they go about finding that truth.

We just need to go out and make sure that we are seeking truth.

Dictated by Me, and Transcribed by Me at 6:19 AM